Put on the Armor of God: Commentary on Ephesians 6 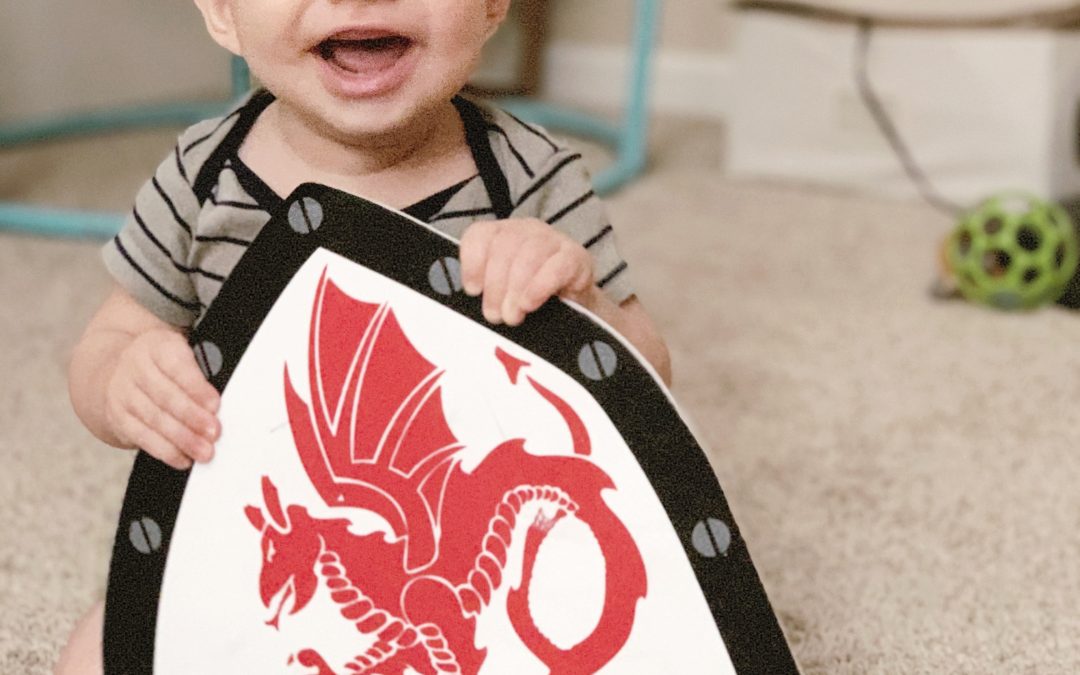 “Let us put on the whole armor of God. Do you see how he banishes all fear? For if it be possible to do all, and to stand, his describing in detail the power of the enemy does not create cowardice and fear, but it shakes off indolence. That ye may be able, he says, to withstand in the evil day. And he further gives them encouragement too from the time; the time, he seems to say, is short; so that you must needs stand; faint not when the slaughter is achieved.

Moral. If then it is a warfare, if such are the forces arrayed against us, if the principalities are incorporeal, if they are rulers of the world, if they are the spiritual hosts of wickedness, how, tell me, can you live in self-indulgence? How can you be dissolute?

How if we are unarmed, shall we be able to overcome?

These words let every one repeat to himself every day, whenever he is under the influence of anger, or of lust, whenever he is aiming, and all to no profit, after this languid life. Let him hearken to the blessed Paul, saying to him, Our wrestling is not against flesh and blood, but against the principalities, against the powers. A harder warfare this than that which is matter of sense, a fiercer conflict. Think how long time this enemy is wrestling, for what it is that he is fighting, and be more guarded than ever. Nay, a man will say, but as he is the devil, he ought to have been removed out of the way, and then all had been saved. These are the pretenses to which some of your indolent ones in self-defense give utterance. When you ought to be thankful, O man, that, if you have a mind, you have the victory over such a foe, you are on the contrary even discontented, and givest utterance to the words of some sluggish and sleepy soldier. You know the points of attack, if you choose. Reconnoiter on all sides, fortify yourself.

Not against the devil alone is the conflict, but also against his powers. How then, you may say, are we to wrestle with the darkness? By becoming light. How with the spiritual hosts of wickedness? By becoming good. For wickedness is contrary to good, and light drives away darkness.

But if we ourselves too be darkness, we shall inevitably be taken captive. How then shall we overcome them? If, what they are by nature, that we become by choice, free from flesh and blood, thus shall we vanquish them. For once it was probable that the disciples would have many persecutors, imagine not, he would say, that it is they who war with you. They that really war with you, are the spirits that work in them. Against them is our conflict. Two things he provides for by these considerations; he renders them in themselves more courageous and he lets loose their wrath against those who war against them. And wherefore is our conflict against these? Since we have also an invincible ally, the grace of the Spirit. We have been taught an art, such as shall enable us to wrestle not against men, but against spirits. Nay, if we have a mind, neither shall we wrestle at all; for it is because we choose it, that there is a struggle, since so great is the power of Him that dwells in us, as that He said, Behold, I have given you authority to tread upon serpents and scorpions, and over all the power of the enemy (Luke 10:19). All power has He given us, both of wrestling and of not wrestling. It is because we are slothful, that we have to wrestle with them; for that Paul wrestled not, hear what he says himself, Who shall separate us from the love of Christ? Shall tribulation, or anguish, or persecution, or famine, or nakedness, or peril, or sword (Romans 8:35)? And again hear his words, God shall bruise Satan under your feet shortly (Romans 16:20). For he had him under his subjection; whence also he said, I charge you in the name of Jesus Christ to come out of her (Acts 16:18). And this is not the language of one wrestling; for he that wrestles has not yet conquered, and he that has conquered no longer wrestles; he has subdued, has taken his captive. And so Peter again wrestled not with the devil, but he did that which was better than wrestling. In the case of the faithful, the obedient, the catechumens, they prevailed over him to vast advantage and over his powers. Hence too was it that the blessed Paul said, For we are not ignorant of his devices (2 Corinthians 2:11), which was the way moreover in which he especially overcame him; and again hear his words, And no marvel— if his ministers also fashion themselves as ministers of righteousness (2 Corinthians 11:14-15.) So well knew he every part of the conflict, and nothing escaped him. Again, For the mystery of lawlessness, says he, does already work (2 Thessalonians 2:7)…

When we depart hence, then, and not till then, will the glorious victory be achieved. For instance, take the case of some evil lust. The extraordinary thing would be, not even to entertain it, but to stifle it. If, however, this be not possible, then though we may have to wrestle with it, and retain it to the last, yet if we depart still wrestling, we are conquerors. For the case is not the same here as it is with wrestlers; for there if you throw not your antagonist, you have not conquered; but here if you be not thrown, you have conquered; if you are not thrown, you have thrown him; and with reason, because there both strive for the victory, and when the one is thrown, the other is crowned; here, however, it is not thus, but the devil is striving for our defeat; when then I strip him of that upon which he is bent, I am conqueror. For it is not to overthrow us, but to make us share his overthrow that he is eager. Already then am I conqueror, for he is already cast down, and in a state of ruin; and his victory consists not in being himself crowned, but in effecting my ruin; so that though I overthrow him not, yet if I be not overthrown, I have conquered.

What then is a glorious victory? It is, over and above, to trample him underfoot, as Paul did, by regarding the things of this present world as nothing. Let us too imitate him, and strive to become above them, and nowhere to give him a hold upon us. Wealth, possessions, vain-glory, give him a hold. And oftentimes indeed this has roused him, and oftentimes exasperated him. But what need is there of wrestling? What need of engaging with him? He who is engaged in the act of wrestling has the issue in uncertainty, whether he may not be himself defeated and captured. Whereas he that tramples him under foot, has the victory certain.

Oh then, let us trample under foot the power of the devil; let us trample under foot our sins, I mean everything that pertains to this life, wrath, lust, vain-glory, every passion; that when we depart to that world, we may not be convicted of betraying that power which God has given us; for thus shall we attain also the blessings that are to come.

But if in this we are unfaithful, who will entrust us with those things which are greater? If we were not able to trample down one who had fallen, who had been disgraced, who had been despised, who was lying beneath our feet, how shall the Father give us a Father’s rewards? If we subdue not one so placed in subjection to us, what confidence shall we have to enter into our Father’s house? For, tell me, suppose you had a son, and, that he, disregarding the well-disposed part of your household, should associate with them that have distressed you, with them that have been expelled his father’s house, with them that spend their time at the gaming table, and that he should go on so doing to the very last; will he not be disinherited? It is plain enough he will. And so too shall we; if, disregarding the Angels who have well pleased our Father and whom He has set over us, we have our conversation with the devil, inevitably we shall be disinherited, which God forbid; but let us engage in the war we have to wage with him.

Here wrath is a good thing, here anger is profitable, here revenge is praiseworthy, for just as among the heathen, revenge is a vice, so truly here is revenge a virtue. So then if you have any failings, rid yourself of them here. And if you are not able yourself to put them away, do it, though with your members also. Hath any one struck you? Bear malice against the devil, and never relinquish your hatred towards him. Or again, has no one struck you? Yet bear him malice still, because he insulted, because he offended your Lord and Master, because he injures and wars against your brethren. With him be ever at enmity, ever implacable, ever merciless. Thus shall he be humbled, thus despicable, thus shall he be an easy prey. If we are fierce towards him, he shall never be fierce towards us. If we are compliant, then he will be fierce; it is not with him as it is with our brethren. He is the foe and enemy, both of life and salvation, both ours and his own. If he loves not himself, how shall he be able to love us? Let us then put ourselves in array and wound him, having for our mighty confederate the Lord Jesus Christ, who can both render us impregnable to his snares, and worthy of the good things to come; which God grant that we may all attain, through the grace and lovingkindness of our Lord Jesus Christ, with whom, together with the Holy Ghost, be unto the Father, glory, might, and honor, now and ever, and throughout all ages. Amen.” – St. John Chrysostom

Read the full commentary at https://catenabible.com/com/57558dcd3c6effa740dddaee

St. Gregory the Theologian on Holy Baptism
Sharing: During Times of Plague, Priests Do What Priests Need To Do
I Desire Christ...
Selfishness, Privilege, and Masks
New Year: Out with Resolutions, In with Goals